Hi all!
I just wanted to personally thank Kristen from Secondary Solutions for inviting me to her New Year's Linky Party!  I seriously am so thankful to find more middle level teachers...especially for science!


I encourage you to link up under your respective content area(s)! Who doesn't like to be invited for New Year's? :)


In my travels at the party I have met some great Science-y teacher-y blogs.  I am reading all about Mrs. Phillip is Caught in the Middle's Pinterest Obsession.  :)  It's good to know that I'm not the only one!!

Twas the week before break...

So, based on the title of this post, my overall feeling towards this week is around this work: survival.  Today my generally adorable, polite, and organized students were only a bit shy of a mess.  "Wait---what did you say?"  "What are we doing?" "Where is that paper?" "How do I write that?" followed literally everything I said.  No lie, we started by opening up to the lab we did Friday.  "Lab?" "Where?" "I'm confused" and my favorite, "We had school on Friday?"

Ahhhh!  So, the rest of the week we are taking a break from the normal and the new concepts and having just plain FUN with science.  Each day (Tuesday, Wednesday & Thursday) I am going to set up seven science based stations with general household items.  Tomorrow is focused around the theme of gravity and air pressure.  More posts to come on how it goes! :)

So the NYS Curriculum kind of confused me for a few months, more than it should have.  I wanted to teach conceptually using the Key Ideas, but then things overlapped, so I only spent a bit of time on weathering/erosion.  But, I will have to revisit it later in the year.  It's not terrible to spiral like that so I think it's okay, but these are only a few of the ideas I had from the "Round One" of erosion/weathering.


Weathering Walk:  We walked around the school campus and recorded examples of weathering and identified them as either physical or chemical.

Wind Erosion Lego Lab:  We basically constructed cities out of Legos (and clay...next time I would omit the clay and maybe use a smaller bit of Play-Dough due to the mess clay made) on trays.  We filled it with sand, and then tipped the trays (propped up with a stack of books).  We put the trays under boxes with small holes punched in.  In the holes on one side we put straws and the kids "blew" their cities.  They then had to record what happened.  I had one very creative student who made a reservoir to catch all the sand.  Basically, we talked about where it goes, how it impacts it, etc.  The original idea was to use a fan, but it didn't work AT ALL.  So, I had to modify.  The kids loved the project and it was good to see how they worked as a team.  Here is some of the data the kids recorded: 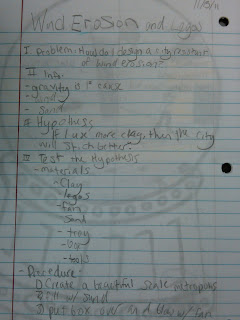 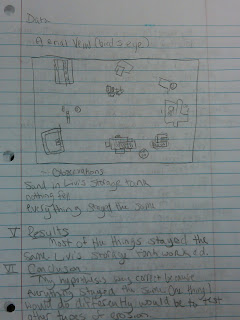 The final activity I will share is the post-assessment of their knowledge. I gave students a snowglobe template and they needed to create a scene which showed both chemical and physical weathering.  They listed them on a following page: 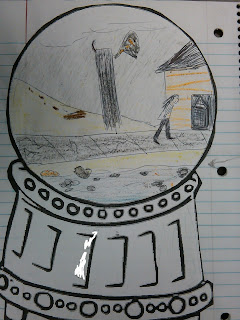 So I also taught fossilization with my little munchkins.  I was VERY fortunate to actually have fossil samples from the local area to use.  I labeled the fossils with letters and students worked to find and examine them, then sketch and record in their journals: 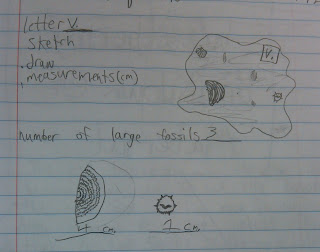 Email ThisBlogThis!Share to TwitterShare to FacebookShare to Pinterest
Labels: fossils

Hi!
So since I didn't start my blog at the beginning of the year (it was a bit crazy!)  Here are some photos from my student's lab journals from that unit.  I have so much to change for the future but here are some little items:

Email ThisBlogThis!Share to TwitterShare to FacebookShare to Pinterest
Labels: astronomy

Welcome to "Sixth Grade Science Rocks!" which is my new blog dedicated to teaching Science.  I wish I had started this sooner since I now missed showcasing our Oreo Phases of the Moon and our Lego Wind Erosion Buildings.  But anyway, I decided what better time than to start now.  So for today, all I have is my new idea of how to keep track of what students need in their lab journals.  We are keeping a running list each 1/2 quarter on which labs are needed.  Then, when I collect them for a grade, I (and the kiddos!) know EXACTLY what should be in there!